With exactly 250 days to go until the Paralympic Games, British Para-Swimming has today outlined the criteria for those looking to secure a spot on the plane to Tokyo.

With the Games now scheduled from 24th August to 5th September 2021, and after a year of disruption, a new policy has been established that will act as the final policy for selection.

As with every Paralympic Games, British Para-Swimming will nominate a team to the British Paralympic Association (BPA) to represent ParalympicsGB at the Games. The document, which can be seen in full below, is broken down into five clear stages of nomination, with the final team confirmed no later than 2nd July 2021.

The policy has been developed during and in response to a pandemic that has presented some significant challenges for the para-swimming community, in providing both preparation and competition opportunities. This has forced and necessitated a move away from our usual Paralympic Games selection process so as to ensure that the policy remains effective.

At the last Paralympic Games in Rio, the British para-swimmers achieved the greatest number of medals of any sport, winning 47 of the 147 won by Brits across all sports. With an unbelievable medal haul of 19 golds, 14 silvers and 14 bronze medals at a home World Championships in London in 2019, the team are well on track for another great Games.

“It’s been incredible to see the level of support and understanding the Para-Swimming community have shown both to each other and wider society during this challenging year. The health and wellbeing of our athletes and staff has remained our priority and we’ve taken that overriding philosophy into this selection policy.

“Working with key partners from the BPA and the British Athletes’ Commission (BAC), we’ve considered the significant challenges and uncertainty around international classification opportunities and competition experiences, to produce what we feel is a sensible selection process. The policy takes into consideration swimmers who have already shown their medal potential on the world stage but allows new and emerging swimmers opportunities to gain nomination to the ParalympicsGB team for Tokyo.

“I urge all swimmers, coaches and parents who have ambitions for Tokyo to read or listen to the policy carefully and reach out to us if they need any additional clarity. I wish all the swimmers the best of luck as we move into the new Tokyo Paralympic year.”

In order to be fully inclusive, British Swimming have released the selection policy for the rearranged Paralympic Games in a number of formats, making it available in PDF, PDF large print and audio versions. Click here to head to our 2021 selection policies page. 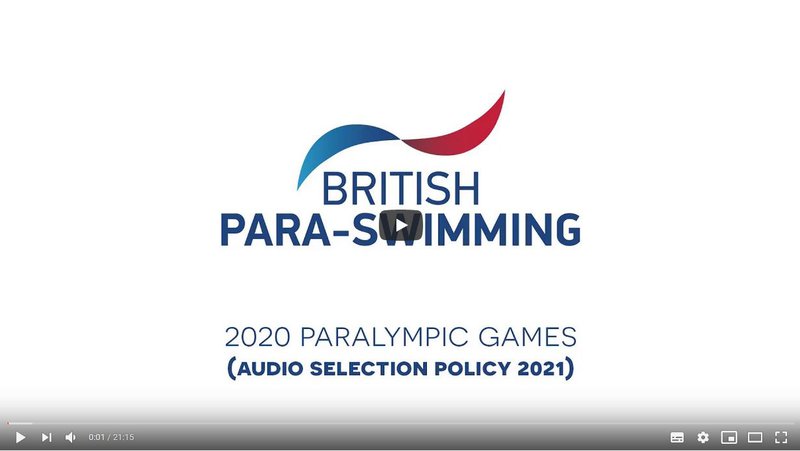 Don't miss anything from the final day of action at the British Para-Swimming International Meet 2021, with comprehensive coverage on our livestream and through the British Swimming social media channels.

Stephen Clegg set a stunning new S12 world record in the Men’s 100m Butterfly to bring the curtain down on the British Para-Swimming International Meet in stunning style.

Make sure to follow every second of the action as elite global competition keeps on coming on day three at the British Para-Swimming International Meet in Sheffield, with our livestream from Ponds Forge and regular updates across social media.