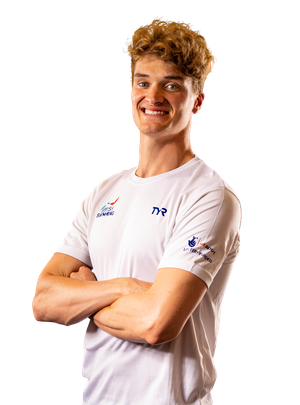 Wilby's time at the 2022 World Aquatics Championships in Budapest saw him win a bronze medal as part of the 4x100m Medley Team. He then collected four medals with Team England at the Commonwealth Games in Birmingham, including a gold and a silver in the 100m and 200m Breaststroke events respectively. The European Aquatics Championships then rounded off the summer for Wilby, with the athlete taking two medals, including a gold in the 100m Breaststroke.

The Tokyo Olympics brought a maiden Games medal for Wilby as he was part of the team that won silver in the Men’s 4x100m Medley Relay, as well as two finals appearances in the 100m and 200m Breaststroke, finishing fifth and sixth respectively.

Ahead of the Games in 2021, Wilby - one of four swimmers pre-selected by Team GB because of his individual Worlds medal two years ago - claimed an individual Men's 100m Breaststroke bronze at May's European Championships, while also helping Britain to another golden triumph in the Men's 4x100m Medley Relay.

That followed on from more medal success across 2018, at the European Championships and Commonwealth Games.

Wilby - who trains as part of David Hemmings' group at the Loughborough British Swimming Performance Centre - took a trio of medals on the Gold Coast to make him one of Team England's most successful swimming athletes at the Games, with gold in the 200m Breaststroke, silver in the 100m event and bronze in the 50m category.

Later that year, two individual silver medals in the 100m and 200m Breaststroke at the Europeans in Glasgow were backed up with gold on the final day in the Men's 4x100m Medley Relay.

His Commonwealth results were preceded by three trips to the podium at the 2018 British Championships, with gold again in the 200m Breaststroke. He took double silver over the 50m and 100m distances in Edinburgh.

The 2017 British Championships saw Wilby back on the podium - with silver and bronze in the 200m and 100m Breaststroke respectively - to earn a spot on the World Championships team. He secured a top-20 finish in the 200m event in Budapest.

A Commonwealth Games call-up to Team England in 2014 proved fruitful for the National Centre Loughborough athlete, who was part of the Men's 4x100m Medley Relay that won gold in front of the Glasgow crowd.

James started his swimming career representing York City Baths club for many years, before his move to Loughborough University to continue his studies in Chemistry, alongside training. Graduating in 2019, Wilby is now focusing his full attention on swimming.